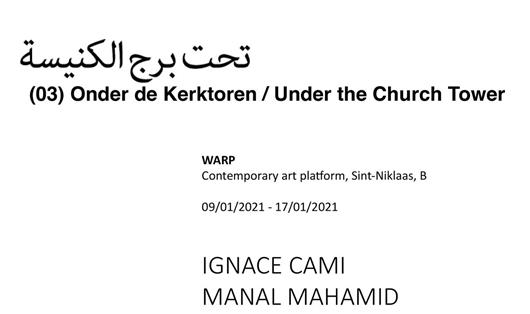 Exoten by Ignace Cami
The multi-disciplinary practice of Ignace Cami (°1986, BE) is deeply rooted in folklore and explores identity and tradition. He takes his heimat as a starting point for storytelling, sculptures, performative objects or installations. He is also engaged in an artist run space and takes part in several collaborative projects.

Trained as a printmaker (bachelor 2009, Luca Brussels) and sculptor (master 2012, PXL-MAD Hasselt), his early works were mostly sculptures, drawings and videos testing the contemporary meaning of local history. During his time at the &quot;Advanced Master of Research in Art and Design (MaNaMa 2019)” at the Sint Lucas Hogeschool Antwerp, his practice started changing. Currently he is a participant at the Academy Jan Van Eyck, a post-academy for art, design and reflection in Maastricht.

From autonomous and static artworks he started moving towards more active and social ways of distributing his works and also physically being a part of them. Gradually he started allowing fictionalized personal history and memories into his practice, making it more relatable. With these new ingredients Cami now researches the possibilities of performative objects and storytelling.

In a globalised world with more export of products and persons over a bigger distance, exotics migrate from their own natural habitat to another. ‘Exoten’ is a PU-foam sculpture of a stripped down lion with a sansevieria planted in its back. Its front paws rest on a little wooden table and its head is twisted 180°.
Within Belgium, the region of Flanders and Flemings form a clearly distinguishable group set apart by their language and customs.The Flemish authorities use two logos of a highly stylized black lion which show the claws and tongue in either red or black. Cami highlights the ongoing dialogue between objects, symbols, memory and identity. The sansevieria, so familiar in Flemish interiors, historically is native to Africa. Thinking about infiltrants, migrants or aliens, do we rather think about their loss of homeland or about caused damage? Infiltration also inhabits an enriching impact and an open view on the world.
Cami re-defines definitions of ‘home’, of being in the world, and constructs a transnational context. Displacement seems to be a major component of contemporary identity-making. It includes an inclusive approach out of global and cosmopolitan experiences and artifacts.

The Palestinian gazelle was and still is a part of my childhood. I grew up in a house where a photo on the wall showed my father, standing proudly next to the Palestinian gazelle. I saw the same kind of gazelle during a family trip with my children, only this time “someone” has decided to call this animal “the Israeli Gazelle”. It may be no coincidence that in this zoo most of the animals were contaminated with a disease that led to the amputation of their part. An image that reflects the case of distortion resulting from the game of role-exchange and names’ crossbreeding. A case that engenders a cultural and civilized state with an identity confusion paving the way to erase historical memory.

It is the human existence and the civilized patrimony… facing identity exclusion and distortion of the personal definition which is printed like a fingerprint in the remnant of the individual and collective memory. This is where the game of roles-exchange becomes complicated, maybe even the most dangerous idea we’ve thought of until now. A game that aims to erase all differences between freedom and slavery, the killer and the victim, resistance and terrorism, the indigenous and the occupier, even between death and life.

Identity is often linked to conflicts, that are either national, religious or political. However, the issue of the identity is a very personal one, creating a personal conflict only. It is related to self-identity for every individual, starting with political, social and finally sexual identity. It is the main hereditary substance for the free human intellect and the unique mark of the human existence.

Hence, any trial to contain identity will certainly fail… despite the visual or current abstraction of the identity and showing it in shapes that differ from its initial existence… it is that mark that no one can change, it is the instinct of things as they were destined to be.