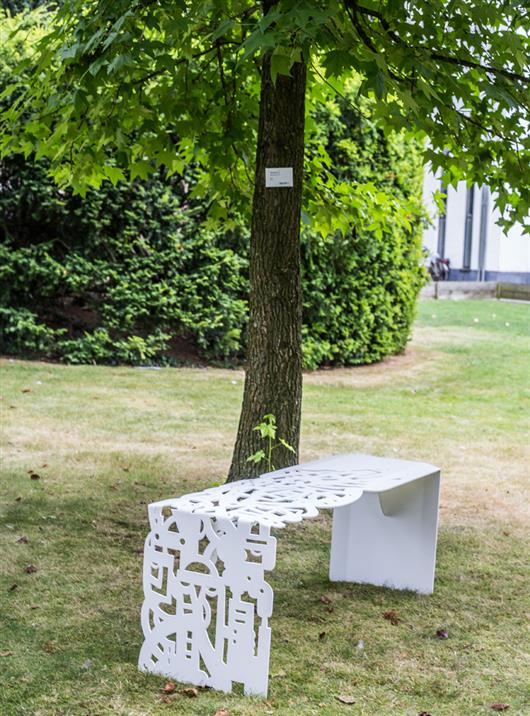 lives and works in Beernem — Belgium

Tim Baute participated at Coup de Ville 2016. This text was published in the catalogue.

Tim Baute grew up in the workshop of his father, who was a blacksmith. It was there that he was infected by the microbe to create ‘things’. With numerous machines and raw materials at his disposal, he took the opportunity to experiment with the different types of steel. After a few years working as a welder, to learn the tricks of the trade, he decided to stimulate his creativity by studying interior design at Sint Lucas Ghent and then a year of furniture design at KHM Mechelen. This designer primarily likes the independence of a piece of furniture. He likes to go against the conventional in his designs, but without losing sight of functionality. He strives for a concept that shows respect for the material used and takes the surroundings and the function into account. The main component in his work is steel. His passion is to explore the limits of the material with new techniques. Combining these with workmanship challenges him to create new products. He has already produced a ‘Stealth Collection’, comprising a desk lamp, wall lighting and a shelf unit. The shape was inspired by Stealth aircraft. In order to be less easily detectable, protruding parts and angular surfaces are avoided as much as possible, so as to escape being picked up on radar.

For Coup de Ville, Tim Baute has created a totally new piece of furniture, namely a Stealth bench. Like an aircraft, the design has a unique shape. In profile the linear and angled pattern of the base stand out. Through the absence of large, visible, vertical surfaces or ornamental additions, the seat section loses solidity and gains spatial transparency. The bench is constructed from seven, four mm thick steel plates that have been cut by laser. The montage and welding was done using Tig welding equipment to obtain sharp inner and outer corners. The seat is finished using sustainable wood. Tim Baute sees this bench as an autonomous sculpture, but with slight changes it could perfectly well be manufactured industrially.