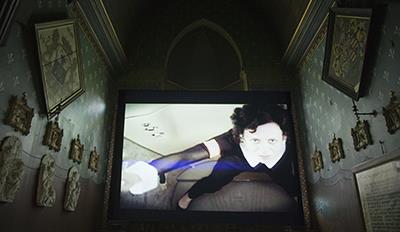 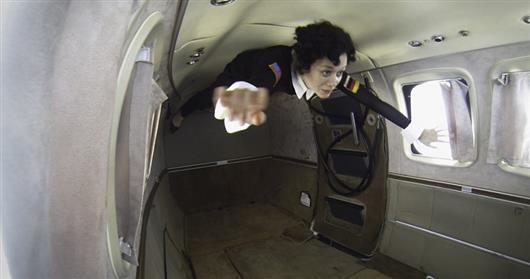 Nadja Marcin participated at Coup de Ville 2013. This text was published in the catalogue.

Nadja Verena Marcin is a performance artist. Recognised internationally as one of the first New Genre artists, she focuses on human behaviour, elementary emotions and psychological reactions joined with role-playing by means of video, performance and photography. Replete with playful, bold images, poetic texts and self-made theatrical props, her work displays the ambiguities of the constructive/destructive potential of human nature and its often dialectical behavior. She confronts elementary emotions and releases psychological mechanisms. In so doing, she investigates truths about morality, history, gender and politics in Western culture.

On the cover of TIME Magazine on 8 April 1966, a few decades after the statements by Max Stirner or Friedrich Nietzsche, appeared the question: “Is God dead?” The corresponding article in the pioneering golden sixties – with a rhetorical sense of drama – made alarming mention of the growing atheism in America. 47 years after the publication of this TIME cover, Nadja Verena Marcin, who flirts with weightlessness and the looming fall in several of her performances, wants to expose her body to the zero gravity experience while she cites a fragment from Friedrich Nietzsche’s text about ‘the madman’ (der tolle Mensch, famous for the cry: “God is dead!”) in The Gay Science. This text continues to be the manifesto of atheism. Marcin chants this today, somewhat ironically, in an age that reflects the consequences of the loss of religion. For her, the weight of this text stands in contradiction to the weightlessness, physical and mental, that it can evoke in humankind. The performance will be made more difficult by the endorphins in her body, a consequence of the explosion of emotion and enthusiasm caused by her complete weightlessness.

Nadja Marcin arrived at this concept after having discovered the roof structure of a music kiosk in the city park in Sint-Niklaas. She conducts her performance in a small Aurora erospace airplane in Florida during some fifteen weightless loops of a parabolic flight. She is filmed by two cameras while doing so. With ‘Zero gravity’, she raises the discussion about the current state of humanity in a period with endless possibilities and consumerism, but often lacking any deeper orientation. She metaphorically and literally becomes a crash test dummy in a heavenly location. In this way, she wishes to provide an impetus for rediscovering our balance in the current age.