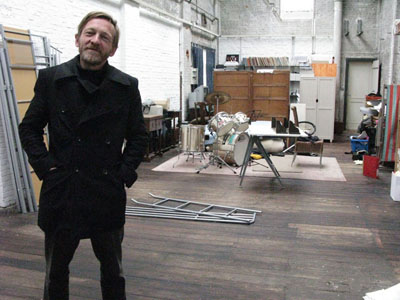 Michaël Borremans participated at Coup de Ville 2010. This text was published in the catalogue.

Around 1995, Michaël Borremans moved away from graphic arts in favour of drawing and painting. From that moment onwards, his career took off in leaps and bounds. Borremans' works are figurative in nature. They are marked by a refined technique and take their inspiration mostly from footage garnered from films, newspapers, magazines, or from materials on the Internet. During the past few years, the artist has likewise involved himself in short film features, using the traditional cinematic medium.

The feeding (2006) is a 35 mm short film transferred on to DVD that is being continuously played. In the context of the exhibition, the film is combined with sketches in oil, such as Add and remove, which in terms of their content stand in close relationship with it. The ambiance generated by this artist's oeuvre is often described as alienating, mysterious, or enigmatic. This kind of special atmosphere lies rooted in his great admiration for paintings that take the art of conjuring as their subject, for instance, works by old masters such as Georges de La Tour or Jean-Baptiste Siméon Chardin. What links  these works is the fascination for the performance of seemingly magical feats and the accompanying trickery (trompe-l'oeil), creating the illusion that things disappear and reappear or dey the laws of nature. With such actions, it is always the intention to keep what is actually happening and how a certain effect is created a mystery to the audience. In The feeding, several diverse elements have also been eliminated or are transformed vis-à-vis the original picture.

The initial starting point is a photo showing black people serving their white masters at mealtime. The secondary elements in the original picture, the black servants and the table, are transformed into the sole remaining subjects of the picture by the filtering out of the white people. There is hardly question of any action. All attention is focused on the table where a ritual is performed and that appears to be floating in space. That table, a simple common piece of everyday furniture, is morphed into a podium that is the setting for an absurd theatrical scene. Borremans' choice for this film and the oil paintings was inspired by the house from the so-called 'New Objectivity' or 'New Pragmatism' period in which the works are being presented. The architecture provides a clear separation here between the staff working and living areas an those of the occupants themselves.