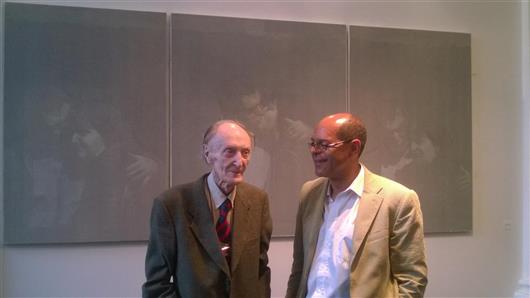 lives and works in Sint-Martens-Latem — Belgium

Marcel Maeyer participated at Coup de Ville 2010. This text was published in the catalogue.

Up to the age of thirty, Marcel Maeyer, artist and professor of art history at the University of Ghent, lived in Sint-Niklaas. His ninetieth birthday, plus his never-ending artistic output, is the reason for giving him a place at Coup de Ville. It is somewhat unusual, in the sense that it involves a dual exhibition of works by both Maeyer and his uncle Alphonse Proost. The Sint-Niklaas City Museums already have a number of Proost paintings in their collections, some of which have been donated by Maeyer.

Marcel Maeyer's interest in art was awakened at an early age by his uncle. As a child, he admired Proost's virtuoso technique of capturing hot and cold in one vibrant brush stroke. The late expressionist form that the artist employed has had a major influence on the way in which the young Marcel represented nature. It is precisely this subtle treatment of nature that can be seen in the paintings of his own that Maeyer has selected for the exhibition. Because the paint has been absorbed by the canvas, it appears as though the outer skin of the objects has been fixed to the paintings. However, for Maeyer, it was never about a perfect representation of reality, but about capturing its essence. In his current paintings, the brush stroke has become almost invisible and transparent.

In addition to these landscapes, there will be paintings in which the artist has depicted the mythological theme of the abduction of Europe. From a distance, they seem like light blue monochromes; the abduction drama only occupies a minuscule part in it. They contrast with the close-up of a couple in love. The use of the triptych form suggests the old tradition of religious artworks, and gives this work a ritual and solemn nature, which transcends the fleetingness of the kiss.