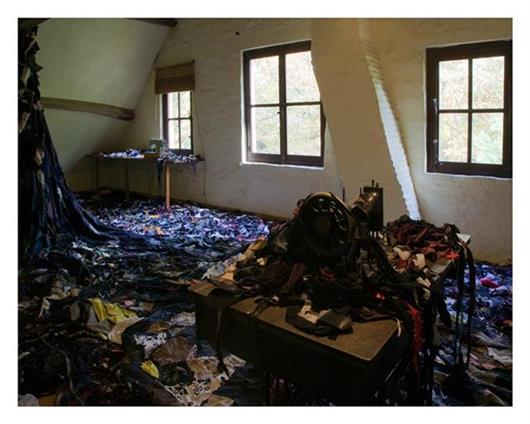 lives and works in Beijing and Amsterdam

Haifeng Ni participated at Coup de Ville 2010. This text was published in the catalogue.

In the mid-1990s, even before China sought to connect with the rest of the world, Haifeng Ni left his homeland to settle in Europe. Using photography, video, installations, or his own body, he often deals with the topic of migration, both of products and of people. Ni positions himself in the boader context of post-colonial relationships and globalisation, with an emphasis on the economy, and the production systems that form a part of it. As distinct from the economic imperatives of production, efficiency and functionality, he characterises art as essentially lacking purpose.

The positioning of the Para-production installation in the attic of Walburg Castle connects with the historical past of the place. In the 19th century, this castle was called Zeildoekhof (sail cloth yard), and played an important role in local textile production. Para-production comprises antique, but still operational sewing machines and textile off-cuts, which the artist has imported from China. During the exhibition, a group of volunteers will turn the pieces of cloth into a gigantic piece of textile. What is produced in this way occurs without any economic purpose in mind and without the aim of earning any money. The result neither meets any market demand, nor the community's desire for usefulness.

The artwork focuses on participation, and it creates a social dimension through people who want to take part in the further actualisation of it. In this way, the artist wants to meet the need for social contact through his work and its associated activities. Para-production criticises alienation through the employment process as a consequence of mass production. However, Ni not only sees this phenomenon in manufactured products, but likewise in today's world of art. Quite a number of artists set up enormous studios and employ a large number of employees, often underpaying them. In many cases, this is nothing more than mass production. Haifeng Ni uses his way of working to inspire a fundamentally different practice of the arts.